After several hours of gaping in awe at the Apocalypse Tapestry in Angers, France, I kept thinking “Why isn’t this masterpiece world famous?”  Well, perhaps it is famous in France, but in the states you’d need to be a big medieval art nerd to have heard about it. The most likely reason  is it’s a difficult and huge work.  Originally 90 scenes in six 78 foot sections, an impressive 71 well-preserved scenes survive.  The tapestry, designed by Flemish artist Jean Bondol in the 1370’s, tells the story of the final book of the Bible, Revelations.  It would be easy to look at apocalyptic art like this and say “Oh man those medieval people were tripping” but actually this is a straight-up rendering of the Bible text, by a masterful artist and the finest weavers.

Every scene in the tapestry has St. John in it, usually inside a wee Gothic hut, writing down his Revelations, occasionally covering his face in horror in what he sees or gesturing with concern.  An undergrad art theorist could write a thesis on how meta this is: how the artist keeps showing “This is not the story of the apocalypse–this is St. John’s story about how he’s received the revelations of the apocalypse.”  It’s a narrative about a narrative.

And what a narrative!  Revelations is meant to scare the pants out of us.  To me, the story often verges on adolescent dungeons and dragons fantasy (all that running through with swords and battles between good and evil).  But it’s important to try to think with a medieval mind.  When this tapestry was made in the 14th century, Europe was an ugly place, dominated by war, death, suffering and religious persecution.  (I’ll remind all you anti-vaccine people that 75 – 200 million people died during a two year out-break of the Black Plague  in the mid 14th century).   Given the context, these story of Revelations might have looked like family vacation snapshots.

The Apocalypse Tapestry is a perfect art in situ experience, housed in the striking Chateau d’Angers (one of the UNESCO protected Chateau of the Loire Valley).  I strongly encourage all my readers to visit this masterpiece–just read your Revelations first.

How we got to Anger: train from Saumur.
Where we slept: Hotel Le Progress.  Price: €55 for a double.  Recommended: yes. 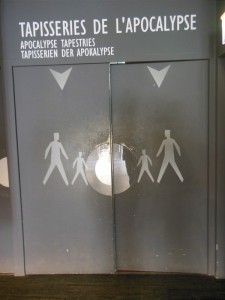 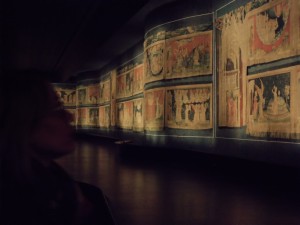 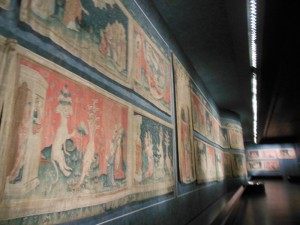 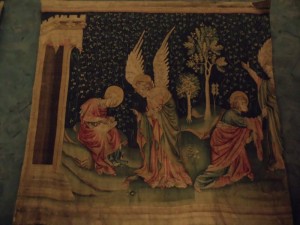 The angel tells St. John, “You better write all this down.”  Later, he eats his book.

The beast with six upright heads and one upside-down head. 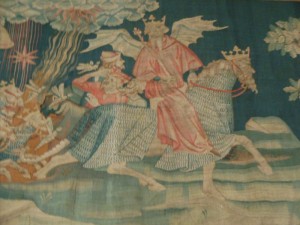 Believe it or not, this is a locust. 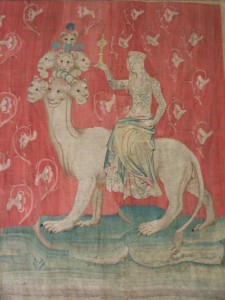 The Whore of Babylon riding the beast with seven heads.  (Women don’t show up much in medieval art unless they’re a virgin or a whore.) 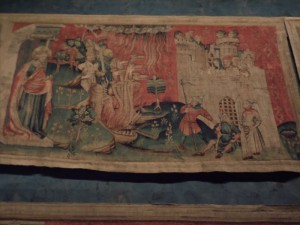 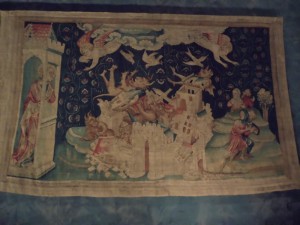 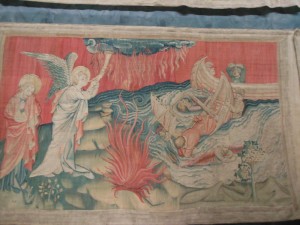 Big can of whoop-ass being opened up on the sinners of the world. 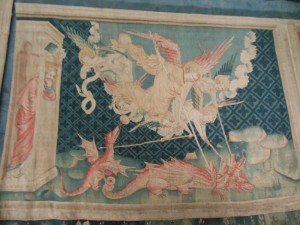 Oh wait, things are getting better.  Those cloud angels are showing the dragons who’s boss. 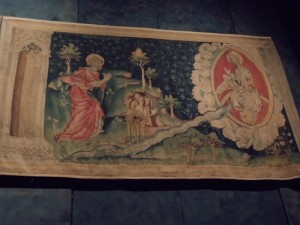 Come on out, righteous people, got your new Jerusalem right here.