The region in Southern Poland called Małopolska has several UNESCO listed wooden churches. These churches are scattered through six different villages which aren’t reachable by public transportation and, since HOB and I don’t drive, we were in quite a pickle.  I mean, it’s not like I would ever want to miss out on a UNESCO church so I googled relentlessly until I found a wooden architecture tour out of Krakow and booked it.

We were the only people on the tour (our guide said people rarely sign up for it); it was just us, our gentlemanly driver and our guide Kasia, who designed and researched the tour herself.

Our first stop was at a church-turned-museum called Muzeum im. Władysława Orkana w Rabce-Zdroju (typing the name this museum gave me consonant-overload exhaustion, excuse me while I go fan myself).

I’m glad we visited the museum first, not only because of the fine Gothic design of the building, but because the museum’s collection illuminated many of our subsequent experiences on the tour.  For example, this cheese mold, used by farmers to form sheep’s cheese into fanciful shapes. 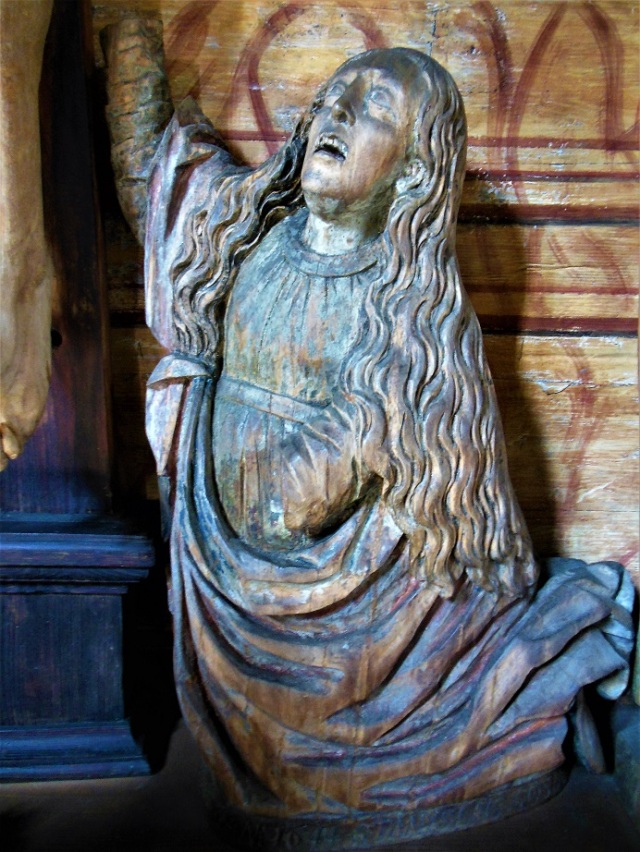 This sculpture, a fragment of an altarpiece, depicts Mary Magdalene’s horror of the crucifixion of Christ.  Notice the scull-like appearance of her face and teeth.

Speaking of scary teeth: our guide borrowed a key to open a closet in the museum and showed us where former parishioners had wedged teeth into the cracks of the log walls. Many people suffered from toothache and left their teeth in the church in hope of relief.  (Take a moment to be grateful you live in an age of modern dentistry). 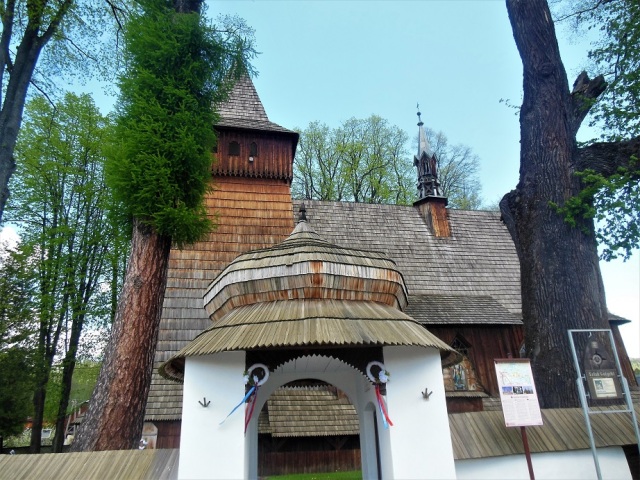 It was a treat to visit the Parish Church of the Nativity of the BVM of Libusza, another wooden church c. 1500, since the interior has its original painted décor and we were allowed to photograph it.

I was interested in how similar the Gothic painted ceiling was to some of the Art Nouveau frescoes in the church of St. Francis in Krakow.  Perhaps the Art Nouveau painters made a pilgrimage here for artistic inspiration. 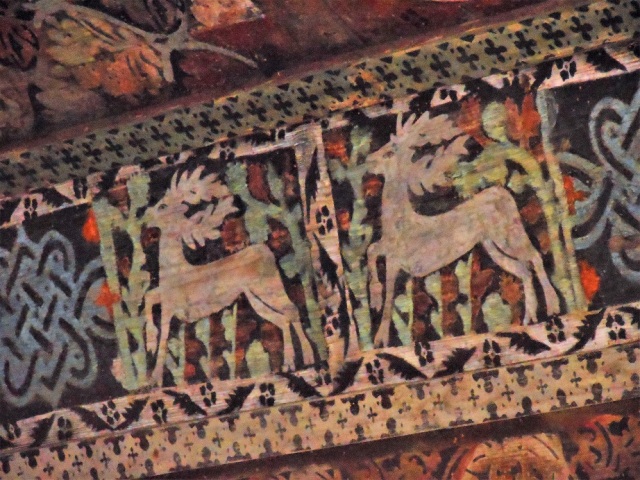 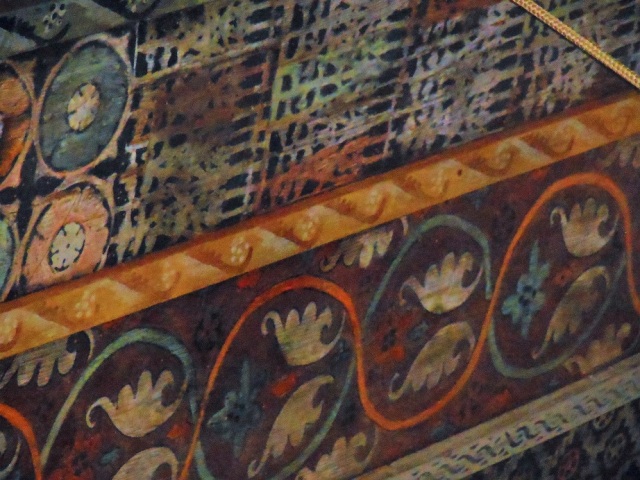 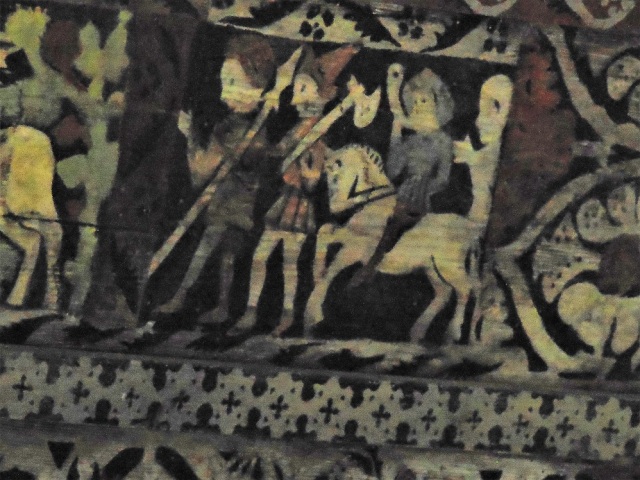 It’s pretty clear these were made using stencils. 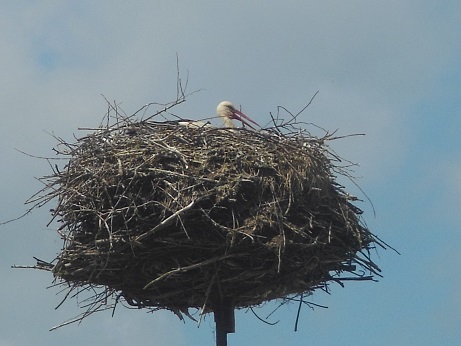 While driving between churches we saw nesting storks on the side of the road.

The final, and most beautiful church was in Debno.  It was built in the late 1400’s without nails—just cleverly joined wood.  The church also has the original, unrestored and yet perfectly preserved wall paintings.  (No photos were allowed inside—AARGH!)

I adore the personal scale and warmth of wooden churches. This church in Debno is constructed of Larch wood.  Don’t know what a Larch tree is?  I didn’t either, until our guide Kasia pointed one out and I took a picture of it.

These rocks outside the church form a big rosary that the parishioners walk beside while praying. 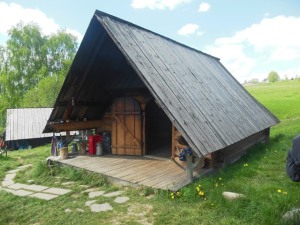 Nearby the Debno church we stopped to buy sheep’s cheese from some farmers—they were smoking the cheese inside this hut. 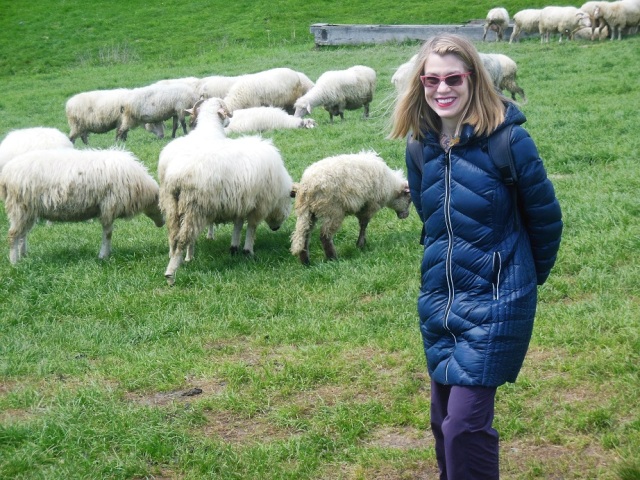 Obligatory photo of me in front of the cheese-producing sheep.

On our way back to Krakow we stopped at spa town called Szczawnica, known for it’s medicinal mineral water.  (In Poland the  government pays for sick people to go to spas while in my country the current administration is striving to take basic health insurance from 22 million Americans).

Back at our apartment, we unwrapped the cheese to find it was made in one of those fancy cheese molds we saw earlier in the day at the museum.  Oh man, was this cheese stinky!  I munched on it during a long, extremely stuffy bus ride the following day and I’m certain every person on that bus was saturated in the tangy, smokey odor but I’m not in the least bit sorry.

How we got to the Wooden Churches of Southern Małopolska: our tour drove us from Kraków .

Where we slept: Apartamenty Astur.  Price: €42 for a double. Recommended: yes.

← Milk Bars of Poland; cheap eats, kind strangers and two lumps of potatoes
Some wiggling, some crying, and lots of walking in Warsaw →