The Terracotta Warriors and Tiananmen Square: how to bury a people

It’s the artists I keep thinking about.

There at least 6000 terracotta warrior sculptures, perhaps many more (their burial site hasn’t been fully excavated.)  These warriors were created during the Qin dynasty, 2200 years ago, when China was sparsely populated.  So how did the emperor Qin Shi Huang find and mobilize so many artists in this rural area outside of Xi’an? 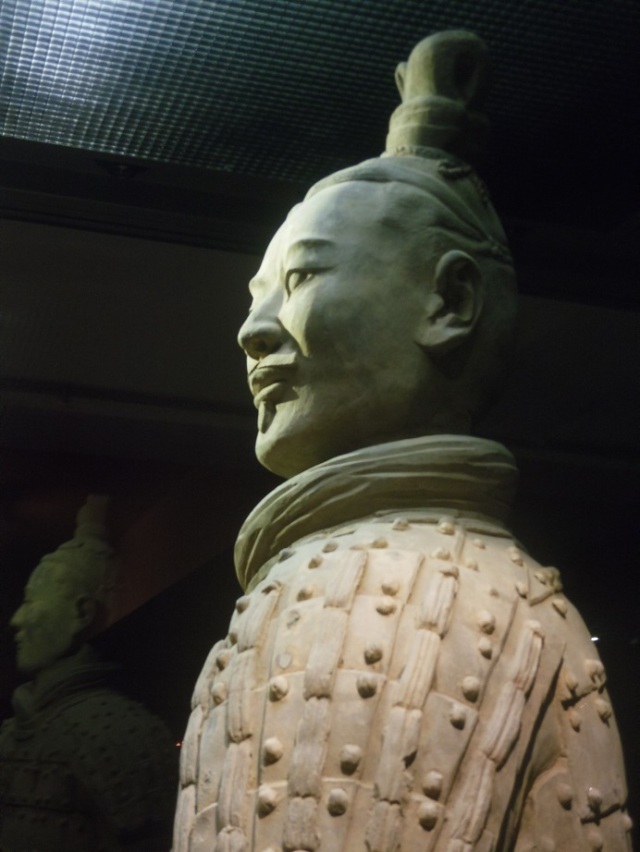 Sure, a despot could coerce thousands of unfortunate people to dig a giant hole and brace the pit’s tunnels with walls.  But how could even the cruelest emperor force an average human to make a sculpture like this?  Is it possible to strong-arm talent? 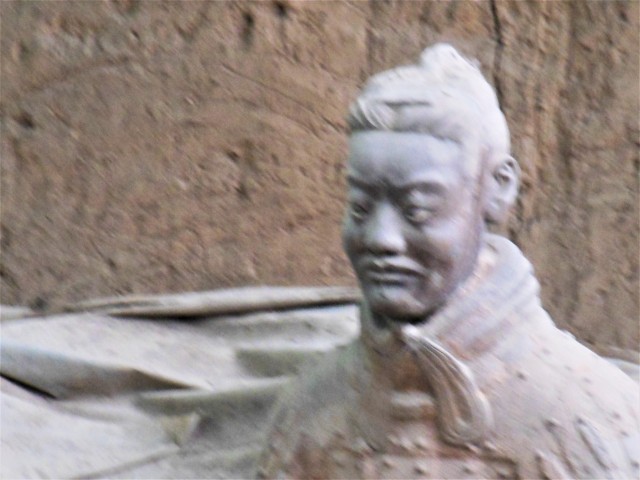 But they did do it, those artists in rural China 2220 years ago.  A crazy emperor wanted an army to guard his tomb and he got it, a real army.  Each sculpture is unique, down to the facial expression, ears and hairstyle.  Every ribbon holding together every piece of armor, every wrinkle of fabric: unique.

If you’ve ever wondered what shoes looked like two millennia ago, now you know, to the very laces.

I’m not an archaeologist, but I’ve seen a lot of art and I know a lot of artists.  These sculptors, I can tell you with certainty, had pride in their work.  I mean, I know they probably had no choice, but they wanted to get it right, to the best of their abilities.

They must have known their work would be buried.  That all their efforts and skill were going to be hidden and appreciated by no one, forever.  (Lucky for us some farmers digging a well in 1974 discovered them, buried in formation).

Backing away from the warrior sculptures, it’s easy to see the artists varied in talent; some warriors are stiff, with tube-like arms.  Others are so alive they seem about to scratch their legs or throw a spear.  I saw faces in the crowd of tourists reflected in the faces of the warriors, whispering to HOB “Look, there’s a guy over there with the same nose as that warrior.” 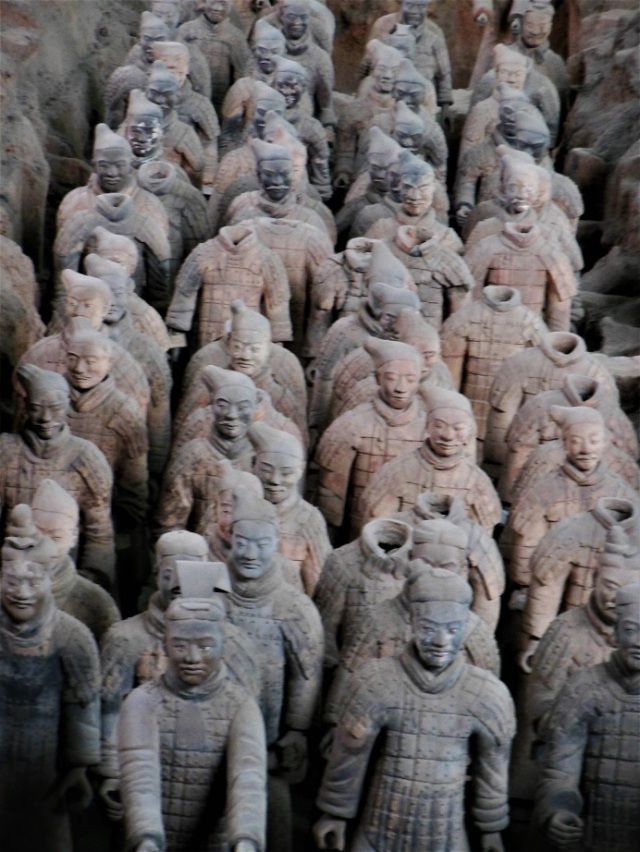 At a distance the warriors are more impressive, but less human.  It is easier to think of them as an emperor’s vanity and less of the achievement of artists.

The day after seeing the Terracotta warriors, HOB and I took an overnight train to Beijing.  HOB didn’t want to leave Beijing without seeing Tiananmen Square, so we decided to walk there.  It was a pleasing walk, through those low-slung old school, hipster hutongs jumbled up with bland hi-rises and burnt orange phone booths that haven’t been used in at least a decade.

Our walk ended outside Tiananmen Square in a long security line, where we waited to be patted down and have our backpacks run through a metal detector.  A guard wanded us and checked our passports and visas.

After the first line we waited in yet another line, where security guards glared and, I kid you not, police robots with inset cameras circled us.  Our documents and bags were checked again, though we fared much better than the Chinese, who were roughly searched.  One woman in front of me had a folded poster from her backpack confiscated, though it looked like a film poster, not anything political.

Finally we exited security and stood in front of a gate with a portrait of Chairman Mao over the entryway.  The Mao portrait was a prime photo backdrop for Chinese tourists: “Hey, I starved 36 million people to death, want to take a selfie with me?”

After passing though the Mao portal we stood in the square in front of Forbidden City, and then we were funneled out into another street, far away from Tiananmen Square.  So we circled around, walked some more and—you guessed it—stood in two more long security lines to see Tiananmen Square.

Only we didn’t really see Tiananmen Square, we just stood in front of it, along with security vans, more police (and police robots).  Dozens of men in military garb marched by, goosestepping in such a mannered, campy way they reminded me of club kids voguing in night clubs in the 1980’s.  Other than a gift shop with Mao merchandise and collectible plates featuring President Xi Jinping reclining in front of waterfalls, our access to the square was completely blocked.  The Chinese tourists stood beside us, denied entry to the main square of their own capital city—People’s Republic indeed.

Of course we never could really leave the security frenzy in China—wherever we went, cameras followed us.  At every train stop, we passed through metal detectors and pat downs that would embarrass the TSA.  Our computers fell to the censors, blocking out most of our regular sources of news.  We only saw one bookstore, in an underground tunnel, and just a couple of news stands, thinly stocked with innocuous magazines.  No one reads on the train in China: they just stare at monitored and censored social media sites on their phones.

I can’t imagine what it would be like to be an artist or an intellectual in China, with no rights to free expression, media or religion.  We saw some wonderful examples of Chinese citizens practicing the traditional arts of calligraphy and Peking Opera.  What is is like for artists who create in non-traditional forms or who want to create political work?  I don’t envy them, though perhaps artists always rise to the occasion, creating their best work in spite of cruel emperors, dictators and presidents-for-life.

By the way, if you were wondering why the Terracotta Warriors were lost for 2200 years, the reason is simple: when the sculpture army was complete, the artists and workers were buried alive inside the pit with their creations so they couldn’t give away the secret of the location.

How we got to Xi’an: train from Pingyao.
Where we slept: Xing Long No.37 Hostel. Price: €16 for a double. Recommended: yes

How we got to Beijing: train from Xi’an.
Where we slept: Nostalgia Hotel Beijing- Yonghe Lama Temple.  Price: €44 for a double. Recommended: yes.

← The mosque is a temple and the soup is bread crumbs in Xi’an’s Muslim Quarter
The Tao of inappropriate laughter: Dongyue Temple in Beijing →