My standard travel practice involves avoiding anything that smacks of shiny; palaces, treasuries, and—most dreaded of all—collections of silver tableware.  Nevertheless, I wanted to see the Golden Pavilion in Kyoto.  HOB and I had both read Yukio Mishima’s novel The Temple of the Golden Pavilion and were curious about this temple which had been rebuilt after a deranged monk burned it down in 1950.

The temple itself was as expected: gold! shiny! touristy!  What I didn’t expect was that the surrounding gardens would be so expansive.  It was as if we popped into some space-time wormhole where the Golden Pavilion landscape was able to take up 100 times more acreage than it appeared to from the outside.

Check this out—doesn’t it seem like the temple is nestled in a valley in a remote mountainous area?  This illusion was created by exceptionally clever landscape designers who crafted the gardens so that they appear to flow right out of a nearby mountain.  Those mountains are really there, surrounding Kyoto, but the designers have borrowed them and brought them into the garden, like props, to integrate the temple in an a comprehensive scenic backdrop.

We also experience this trick of borrowed scenery in Beijing’s Summer Palace, a kind of chill out spot the imperial family would visit when they wanted a break from the Forbidden City.  This is less of a palace and more of a complex, involving a lake, bridges, a long, carved portico, and various other structures.  The grounds of the Summer Palace are not small, but the borrowed hills in the backdrop make the buildings look far way and produce a grand yet peaceful effect.

(By the way, that building on the hill is called The Tower of the Fragrance of Buddha. Fragrance of Buddah?!  I’m picturing the religious figures of the world coming out with fragrance lines; “Allah’s Aftershave”  “Eau de Jesus” “Krishna’s Cologne”….)

Looking at these tranquil scenes, you wouldn’t guess that you were in the midst of one of the most populated cities in world, which is, of course, the intent.

I thought of these borrowed scenery landscapes as a kind of getaway car.  After visiting Tienanmen Square, one of our most disturbing travel experiences, HOB and I were desperate to get away, and joining the Chinese residents in taking snapshots of budding blossoms in front of mountain-backed lake was truly healing. 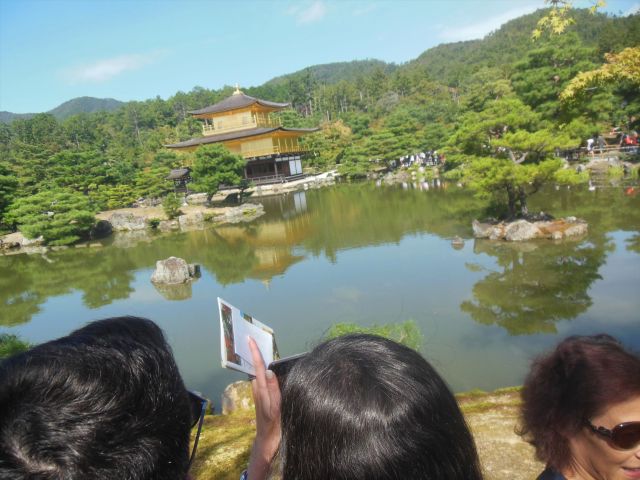 I also found Kyoto to be surprisingly stressful—I thought it would be like Florence: walkable and chock full of treasures every few feet.  In fact the sites were far apart and much of the city we saw through our diesel exhaust-filled bus windows was industrial and generic.  The getaway car experience of The Golden Pavilion and its borrowed landscape was just what HOB and I (and a gazillion other tourists) needed to escape the stress of the city and find serenity in a shared illusion.

How we got to Kyoto: train from Tokyo.
Where we slept: Japaning Hotel Liv Ranrokaku Price: €100 for a double. Recommended: yes.

How we got to Beijing: train from Xi’an.
Where we slept: Nostalgia Hotel Beijing- Yonghe Lama Temple. Price: €44 for a double. Recommended: yes.