At this time, four years ago, our train into Ghent, Belgium was just arriving.  We were there to see the Adoration of the Mystic Lamb altarpiece, and it was even more amazing than expected.  What was totally unexpected, was a hefty dose of culture shock, in fact my most disorienting and uncomfortable travel experience ever.

It was dark and rainy when we checked into our B & B and the innkeeper showed us our room.  As soon as our door was shut I grabbed HOB and said “Did you see that!!!!!  There are blackface dolls all over the living room!”  HOB was skeptical, so we sneaked downstairs with a camera, and found the blackface dolls, a banner featuring Saint Nick and two more blackface men (complete with white eyeballs, bright red lips and gold hoop earrings), a blackface wooden cutout, little tiny black men inside mugs, and most alarming, a St. Nick mobile with 12 dangling blackface heads.

Cut to breakfast the next morning in this charming B & B, when the innkeeper serves us each a chocolate doll, with the same bulging white eyes and  red lips, along with breakfast.  “Um” I choked out “so, um, who is the black man?”  And the innkeeper busted out a huge smile “Why that’s Black Pete!  He’s one of Santa’s helpers and he’s very naughty!”

Black Pete, aka Zwarte Piet (and his identical twin friends), helps Santa give out candy and presents at the feast St. Nicholas, celebrated in the evening of December 5 in the Netherlands, and, as we discovered, on December 6 in Belgium.

As we walked through Ghent, we saw blackface merchandise everywhere, and then….we stumbled on a Black Pete dance party!  It was a wholesome family scene, with Zwarte Piet in a Renaissance costume jamming with a Pippi Longstocking type of character.  Kiddies were dancing, adults were laughing–we even saw a couple of genuine black people!!

When I a kid I was an insatiable reader, and my mom would buy me piles of books at estate sales, garage sales, and the like.  One box contained a book called “Little Black Sambo” featuring illustrations of a racially stereotyped child.  Before letting me read it, my mom sat me down for talk, with that super-serious voice she now saves for telling me I should stop wearing clashing prints.  She explained to me what a stereotype was, and that stereotypes are racist, and that it would be a good idea for me to recognize stereotypes when I saw them.  I was a good student, so I was soon able to identify lots of stereotype (this was the 1970’s so pickaninny dolls and lawn jockey statues were still around).  As I got older, I started to suspect my school’s mascot, an Indian “Warrior” with face paint and feathers, might not be entirely kosher either.

That day in Ghent, I had two voices arguing in my head: one insisted, “Look mom, that is a stereotype, stereotypes are racist and racism is bad“.  The other, my adult voice, was sticking to my travel philosophy “Don’t judge, only observe or engage.  Save your criticism for your own culture.”

I’m not going to tell you which voice won the argument.

How we got to Ghent: train from Strasbourg.

Where we slept: Hotel Castel Gent.  Price: €84 for a double.  Recommended: well….it was a wonderful room, but I should note that December is not a budget friendly time to travel in Belgium and the hotels are too pricey for my taste. 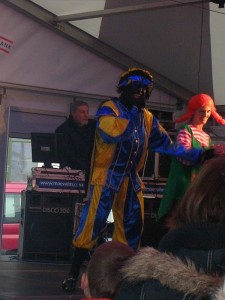 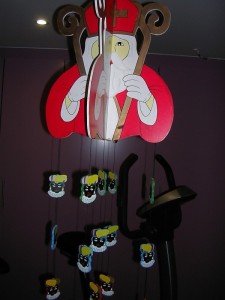 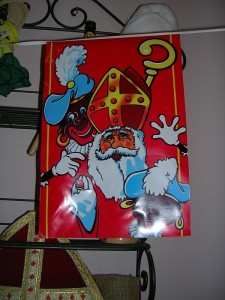 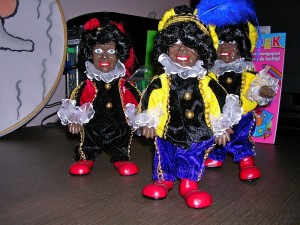 ← In which your budget traveler reveals her expenses: the price of a 10 day trip to France
Curious capital carvings in Chauvigny →