There was this guy I used to run into at parties and before concerts who loved to humblebrag about all the celebrities he knew.  He referred to these celebrity acquaintances, without flinching, as Boldface Names.  As in “I was having coffee with a dear friend recently, well, I can’t tell you who but let’s just say he’s a Boldface Name.”  The celebrity fawning man moved away, but I continue to think of VIP types, with a fair amount of mockery and (perhaps a dash of bitterness) as Boldface Names.

Tainan had a Boldface Name problem in the mid 1700’s.  This coastal city in eastern Taiwan was a main port for Chinese ships.   VIP’s often sailed into Tainan and those big shots needed to be received in impressive style.  But you know, the area near a port is kind of messy, smelly and not swanky at all—what should the Tainanese do? 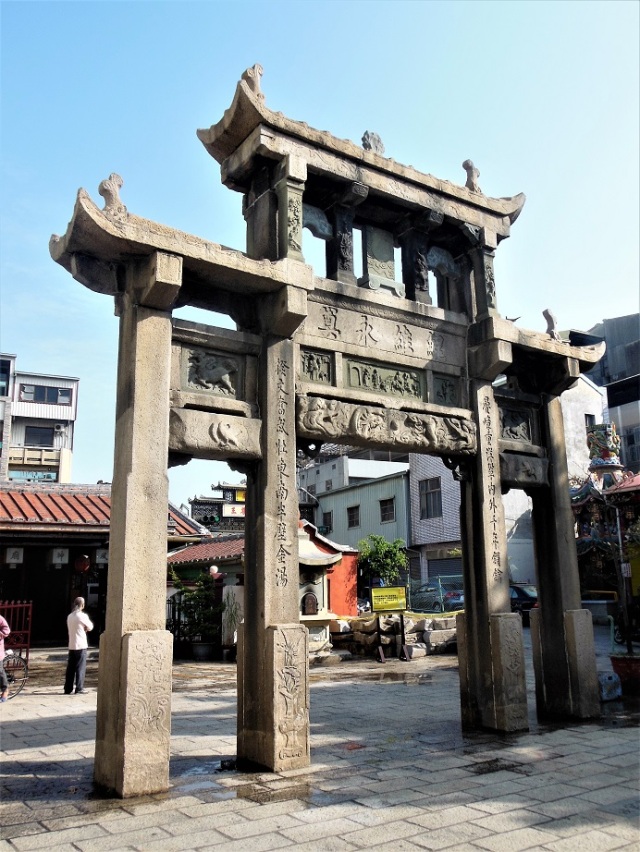 To impress these big shots from the mainland the people of Tainan built a lovely stone reception archway, all carved up with dragons and lions.  When the Boldface Names arrived on the island they marched straight off their ship and through the ceremonial archway: ta da!  Feeling fancy, feeling appreciated, aren’t they now?

And now these well received celebrity types could swagger through the reception archway, into the Wind God Temple.

Whether you were a Boldface Name or just a regular Joe, you go right over to the Wind God himself, bow three times and light him three sticks of incense.  This is the Wind God after all and because of him you didn’t get blown away in a typhoon on your way over from the mainland.

Actually, you can bow before several versions of the Wind God (this god controls earth, water, metal and fire so he can wear all the elaborate red-ball-and-dangly-tasseled headdress he wants to, thank you very much).

Now that you’ve paid respects to the Wind God, bow before the mighty Thunder God.  With the power of his thunder drums (conveniently located underneath his feet) Thunder God makes the heavens roar.  I like his neck kerchief, don’t you?

Let’s say you have a question for one of the weather gods.  After bowing and presenting a gift of incense, pick up two crescent-moon shaped discs (there should be a lot of them around the temple).  Throw them on the ground while asking your question.  “Dear Wind God, am I the biggest Boldface Name in all of China, admired and envied by all the people of Tainan?”  If both rounded sides land up three times in a row, like in the photo, the answer is no.  If one rounded side is up and the other side is down three times in row, the answer is yes.  If the flat side comes up three times then the god is amused with the question.  (Take note: gods in Taiwan are allowed to express irony—clearly this is a superior religion). 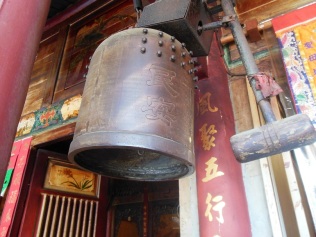 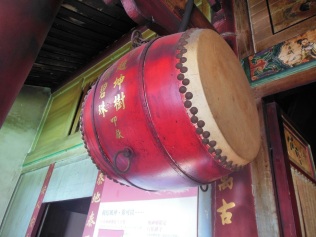 I hope you got the answer you were hoping for.  Either way, take a moment to appreciate the handsome bell and drum near the entrance to the Wind God Temple and be grateful you had a VIP reception with the most awesome gods in all of Taiwan. 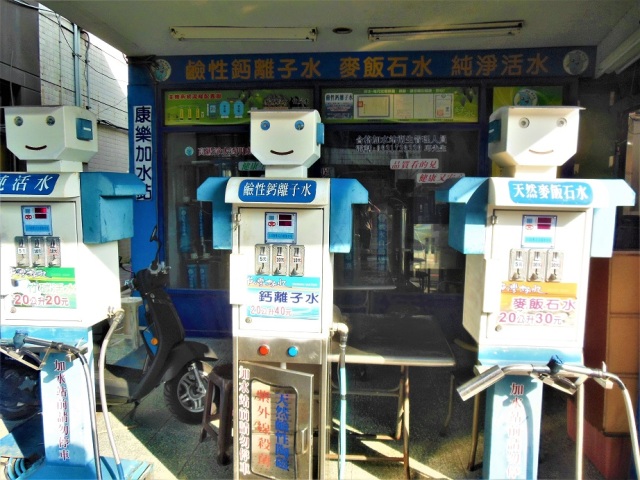 HOB and I were greeted by these robot-shaped water vending machines close by the Wind God Temple.   We were so impressed by their grand welcome that we almost felt like Boldface Names ourselves.

How we got to Tainan: train from Hsinchu.