Some wiggling, some crying, and lots of walking in Warsaw

HOB started and ended our Polish trip in Warsaw, sleeping at the same hostel both times.  Though we’re used to being the oldest people at the hostel, this time we were really old since the other hostel guests were kids (apparently on field trips) pre-teen or younger. 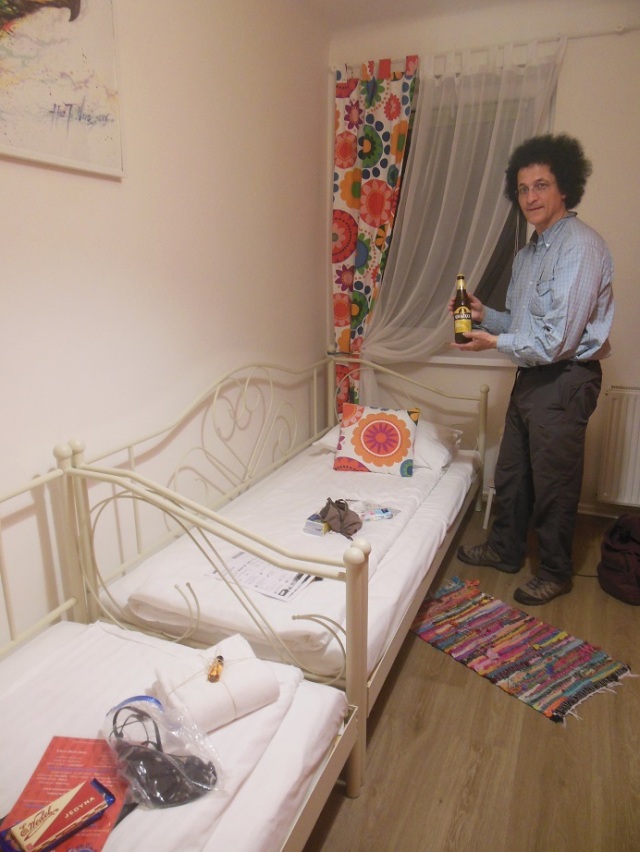 HOB did not share his beer with the kiddies at the hostel. 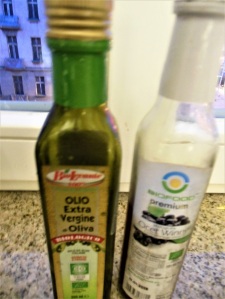 We didn’t have much of an agenda the day our plane landed, other than buying olive oil, which for me is serious business.  Hala Koszyki, an elegantly restored vintage market hall not too far from our hostel, had a perfect store with a variety of fine oil and vinegar.  We bought one of each and used them to dress our salads throughout our time in Poland.  (Okay so I have to confess that HOB and I are such gluttons that we finished the bottle of olive oil in a week and then dressed our salads with vinegar alone for several days afterword.) 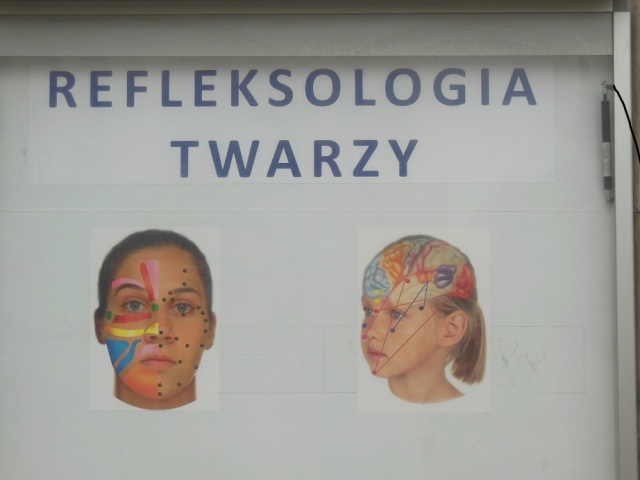 Warsaw is a familiar feeling city, with wide boulevards and high rises that reminded us of our home town Chicago.  But still we found plenty of strange thing to gape at, like this sign, which as far as I’m concerned should hang in a contemporary art museum. 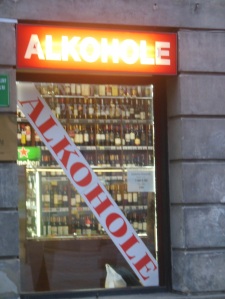 For some reason I thought the Polish word for alcohol was hilarious.

Watch out!  Don’t drink too much and fall in an alkohole!!! 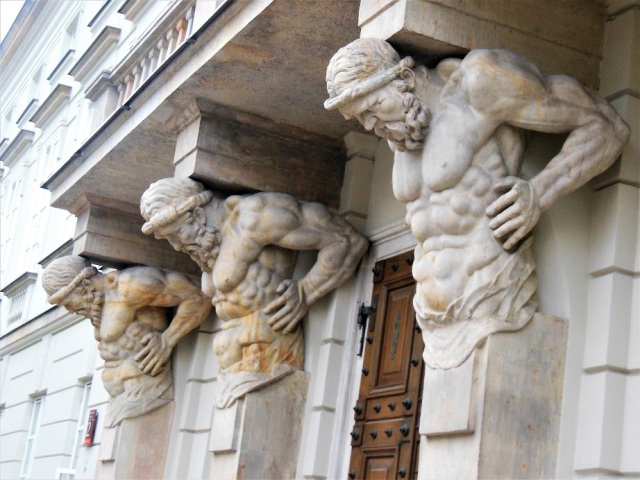 All that holding-up-a-balcony business can really give a guy ripped abs. 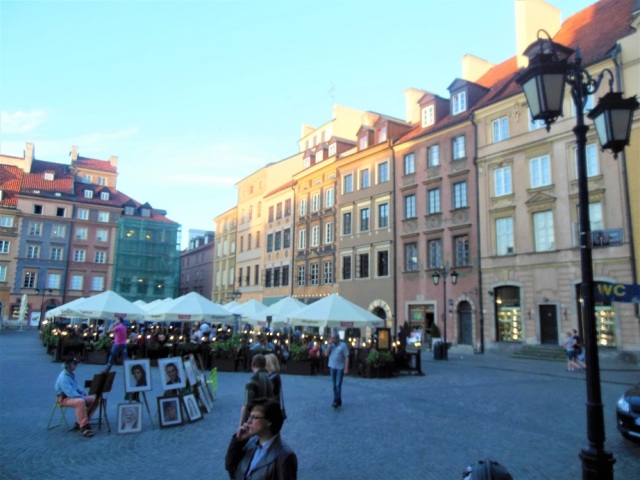 Warsaw’s Old Town is a UNESCO World Heritage site.  It is quite a pleasant place but still, you should realize it’s a reproduction—the original was destroyed in WWII.  (Can you imagine the painstaking effort it took to reconstruct an entire old town?) 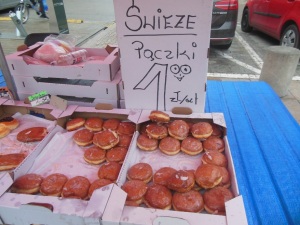 HOB has an unrelenting sweet tooth and he made a paczki disappear in 90 seconds flat. 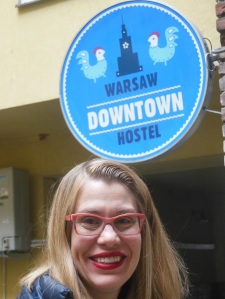 At the end of our trip we returned to the hostel, still full of (even younger!) kids.  We still didn’t have much of an agenda but we wanted to see the site of the former Warsaw Ghetto so we set out on a long, rambling walk.  The weather was ideal and Warsaw has a hip vibe that makes for great people watching—-if only the city had more public restrooms it could be a champion town for walkers

After several hours of walking in the vague direction of the former ghetto, we discovered a wonderful park full of high-end exercise equipment that I tried out and found to be a really fun version of wiggling (I didn’t know HOB was filming me so I’m telling him to stop it),

Two friends were also using a machine together—I like to think they come to the park every day to work out in their cardigans and black skirts. 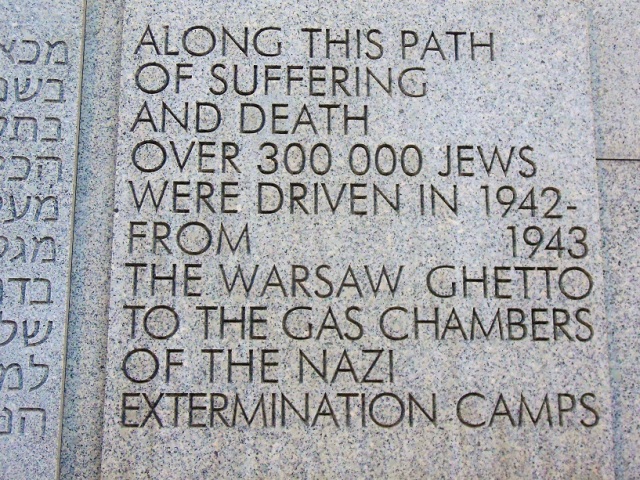 Just beyond the wiggly park we found a museum and monument dedicated to the Warsaw Ghetto Uprising where 13,000 Jews died resisting Nazi efforts to transport them to concentration camps.  The museum square (and the surrounding ghetto area) is filled with reminders of the incomprehensible cruelty of that time, including many devastating personal stories.  HOB and I were doing that ugly sort of crying, where you try to not cry because you think your own personal emotion is irrelevant in the face of so much loss.

It was fortunate that we had a long walk back to our room and especially good to return to all those kids in the hostel kitchen munching bread slices topped with Nutella.  I fervently wish that those children will never experience the horrors of their great-grandparent’s generation.

In the words of Elie Wiesel: 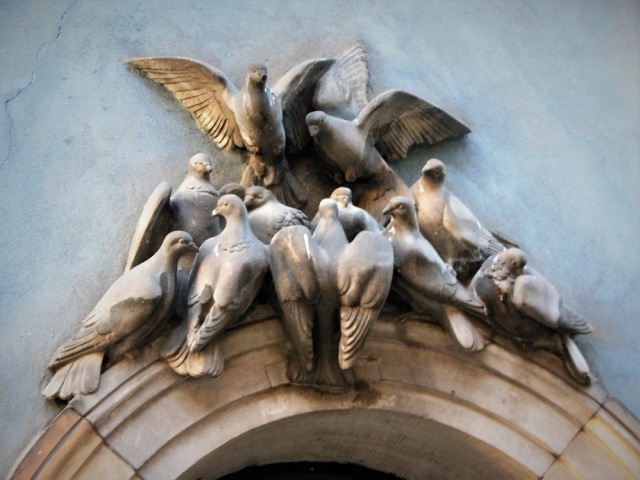 How we got to Warsaw: flight from Chicago.

Where we slept: Warsaw Downtown Hostel.  Price: €29 for a double. Recommended: yes.

← There may be teeth in the walls of the wooden churches of Southern Małopolska
An express tour of Lublin, Poland (be advised that this post makes reference to squirrel testicles) →