Yeah, cute alright, but it’s a minaret, not a pagoda.

And this pretty Chinese arch inside a garden.

This isn’t a garden, it’s a mosque.  Or maybe it’s better to call it a mosque complex.

Anyway, the Great Mosque of Xi’an has been around almost since the beginning of Islam.  It was first built in the 700’s, though most the current complex dates from the 1300 to the 1700’s.

Inside the mosque complex you walk through four courtyards.  Inside this courtyard. the fourth, is a pavilion called the Phoenix, because it’s supposed to look like a bird taking flight.

The prayer hall, at the end of the fourth courtyard, does finally look more like what I think of as a mosque.  We weren’t allowed to go inside, though, so I can’t tell you about the interior.

The roof guardians (the little creatures on the corners of the roof of the prayer hall) were also suprising as normally there’s a ban on figurative art in Islamic decoration.

We met this friendly couple, Singaporean tourists Arif and Moana, while marveling at the beauty of the spring blossoms.  (This is the first time I ever posed for a photo with a selfie stick—do I look nervous?)

Outside the mosque is a vibrant street market filled with temping snacks and much theatrical stretching, pounding and rolling out of foodstuff (you can hear the pounding in the clip above).

I bargained for a gift for my parents—a shadow puppet—from one of the market stalls.

Like every place we visited in China, the market street was litter free, despite the teeming people and their garbage producing treats.

Here’s why the food in Xi’an tastes so yummy: fresh ground peppers.

Also interesting about this short clip: you can see the stall owner tap a sign with a QR code on it.  This is how most people pay for things in China—through scanning these codes with their phones.  Even the scrappiest street food carts had them.

We tried out paomo, a famous Xi’an Muslim dish, for dinner.

After you order paomo, the serving staff brings you two discs of bread and bowl.  You have to take that bread and shred it up into crumbs.  No really, they have to be crumbs—if you make the pieces too big you will look like a total schmuck.  The bread is unleavened and tough so the act of shredding it is more time consuming then it looks.  (Do Xi-an residents suffer from paoma-related carpel tunnel syndrome I wonder?)  I guess you could look at it as a form of meditation and time to chat with your dining companions. 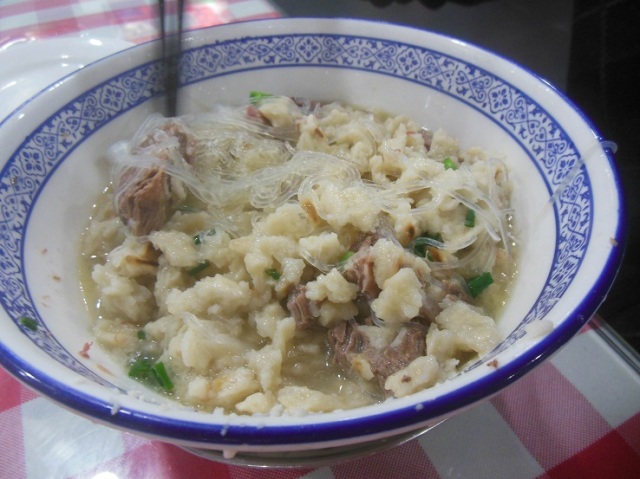 After you’ve made your crumbs, the server takes your bowl to the kitchen where it is mixed with broth, lamb, clear noodles and herbs.  It is served with red pepper sauce and (sweet!) pickled garlic.

How we got to Xi’an: train from Pingyao.
Where we slept: Xing Long No.37 Hostel. Price: €16 for a double. Recommended: yes.

← There are probably people who don’t mind pooping in a glass-walled Beijing bathroom
The Terracotta Warriors and Tiananmen Square: how to bury a people →