This time every summer I usually go to a conference.  This year that conference is in Chicago.  While I’m kind of bummed not to be visiting a new city, I’m thinking of this as an opportunity to see Chicago with my traveler’s eyes.  After all, travel is more than seeing sights—it is the experience of a new vernacular.  How wide are the sidewalks?  What is the zoning like?  Where are the addresses placed on buildings?  What kind of street art is around?  Do bus stops have benches?  How is public life separated from private?

Okay I know I just said I don’t want to write about architecture right now and this isn’t really about architecture—it is about the idea of architecture.  All cities identify with their skylines and finding images of skylines is standard wherever you go.  In Chicago we get fixated on certain buildings that aren’t those famous buildings you see in the skylines on postcards.

The Edgewater Beach Hotel is an example of those buildings everyone is so weirdly obsessed with.  It started out as a hotel in 1927 and now it is one of many apartment buildings by the lake in the north-side Edgewater neighborhood.  People call the The Pink Building.  I went on a tour of The Pink Building and it was fun but not all that remarkable considering Chicago is a city of astonishing architecture.

The Pink Building is a thing, like it just is everywhere on the north side.  Here’s a scale model of it in a store window. 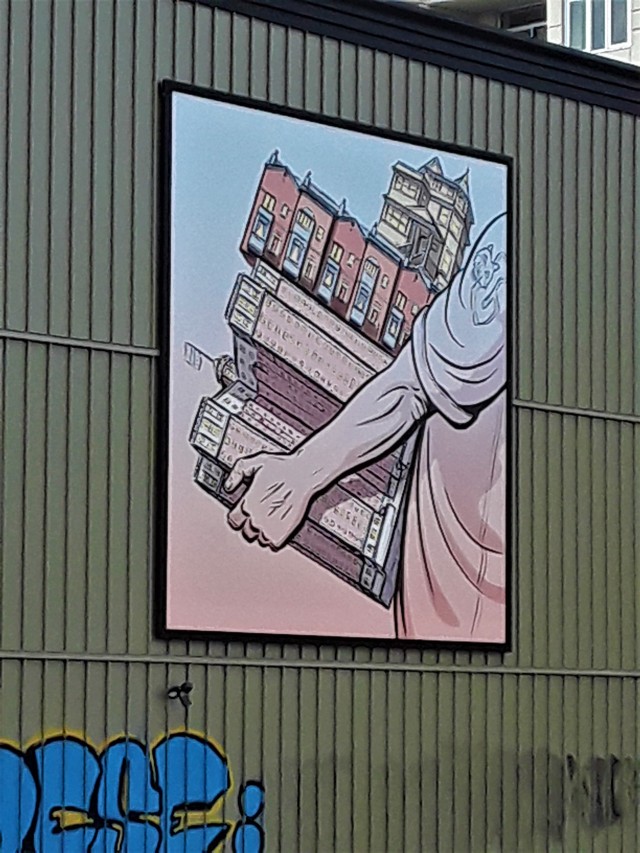 It also shows up in a huge painting, depicted as a kind of meta-architecture sandwich.

One of the train stations in Edgewater has a mosaic of The Pink Building.

And—GAH!—an even more self-aware painting of a man painting The Pink Building which is naturally hung on the side of a building. 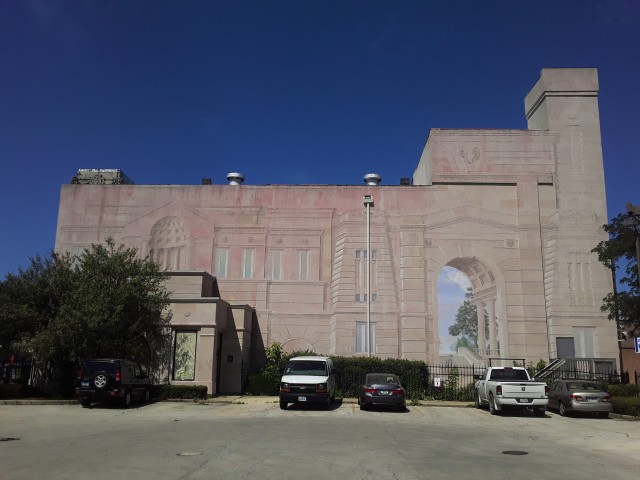 If you look carefully, Chicago also has splendid trompe l’oeil.  It often covers the entirety of the side of a building.  Because it isn’t enough to be a bank in Uptown—you need to be a bank masquerading as a classical villa.

Doesn’t matter if one wall of your apartment building has no view—just paint a ginormous fancy rose window on there and you’re good to go.

The No Shame Ugly Gas Meter

Now maybe where you live the gas meter is sort  of hidden—like bare minimum the gas company paints it to match the building.  Nuh uh, not in Chicago—even the most stately old terracotta beauties have a nasty gas meter just plunked out right in front of it, no shame.

Look at this meter, just begging for toddlers to smack their heads against it. 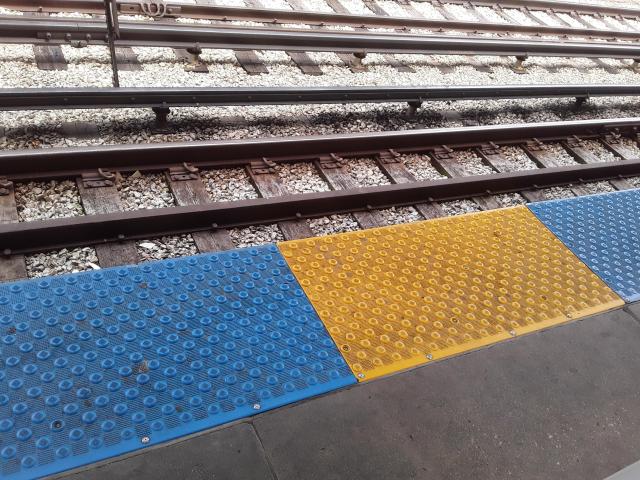 These bump tiles were installed at the edges of all train stops about five years ago. 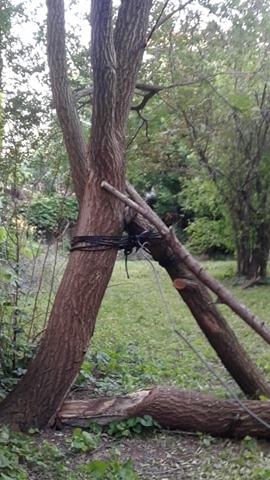 Nothing, nothing says Chicago to me like The Grampa Job.  What exactly is a Grampa Job?  Well imagine you have a thrifty grampa—maybe he’s an immigrant from Eastern Europe—and he doesn’t see the point of paying good money for someone else to fix something he could darn well fix himself.  For example, a recent storm split a tree in my neighbor’s backyard, taking an old electrical wire down with it.  Rather than hire a tree removal service, my handy neighbor used the fallen part of the tree to prop up the still-standing tree half and tied it all together with the electrical wire.  See?  Fixed. 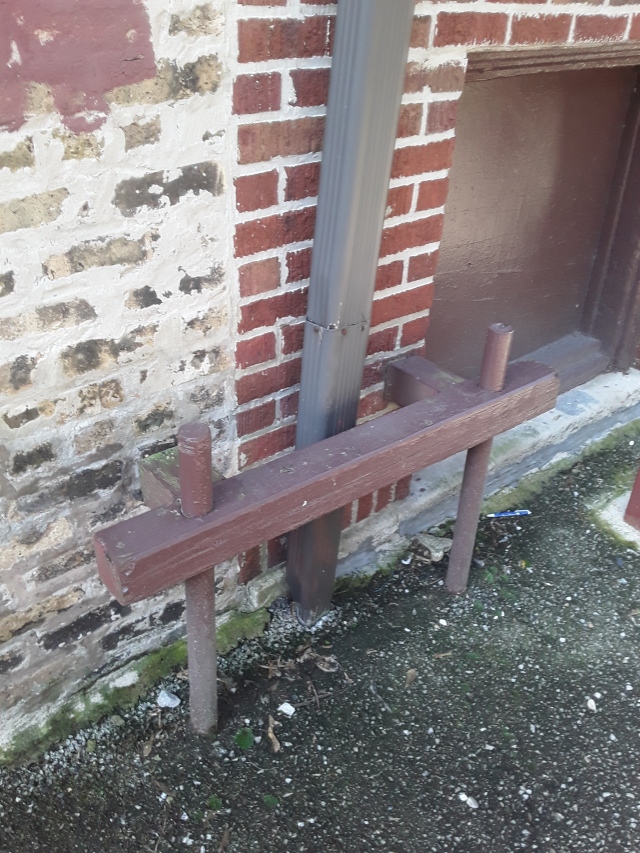 Must have been a grampa who got tired of cars bumping into his gutter—take that, gutter bumpers!

A perfect showcase for Grampa Job is the made-it-myself-fence.  Grampa has a garage full of 25 year old springs, pipe parts and miscellaneous hardware that can get you a fine fence at a fine price.

Often seen in Chicago: the bare bit of earth aggressively fenced off with the classic Grampa Job combination of garden stakes and plastic chains. 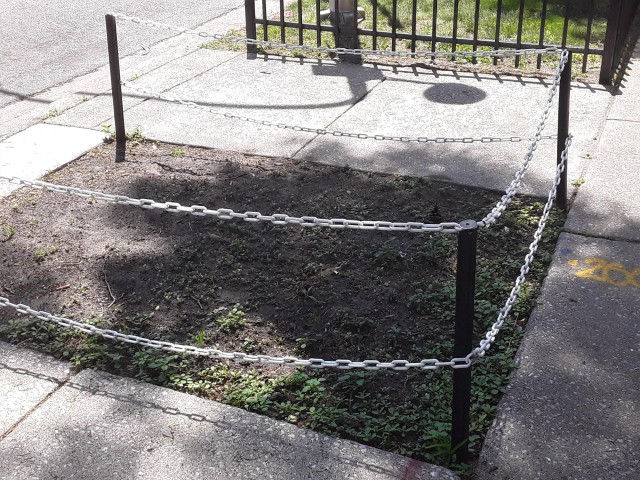 How would you describe your home town’s vernacular?