Now if I told you that there’s a town called Berat in Southern Albania with UNESCO protected Ottoman era houses, a romance novel-worthy castle, and an exquisite icon museum, you’d probably want to go, right?

Berat is gorgeous but also relaxing and super-duper friendly.  Let’s make that gorgeous, friendly, relaxing and budget friendly too—-our lovely guest house was less than €20 a night, including a lush breakfast, a welcome Turkish coffee on arrival, pomegranates picked straight the tree outside our room, and a glass of our host’s homemade wine. 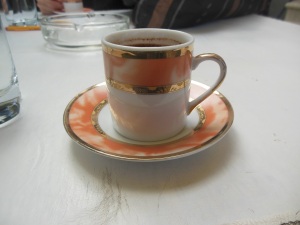 We headed straight uphill through the cascade of white ottoman houses to the icon museum (more on that later) where we stayed until closing time.  Then we toured the castle sites. 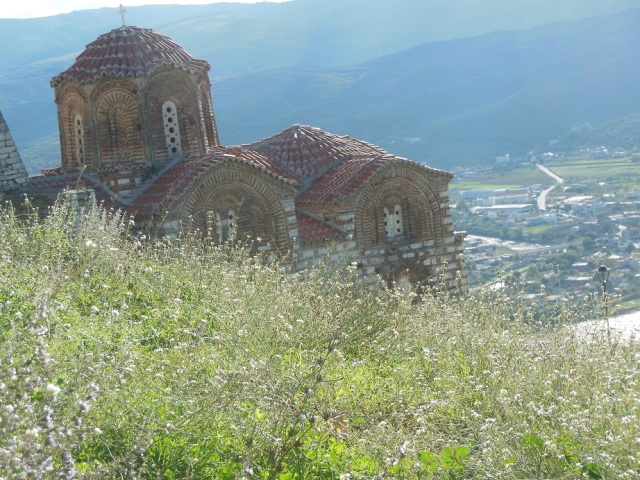 We especially loved the 13th century Holy Trinity Church which we enjoyed with the soundtrack of two simultaunous calls to prayer accompanied by howling dogs. 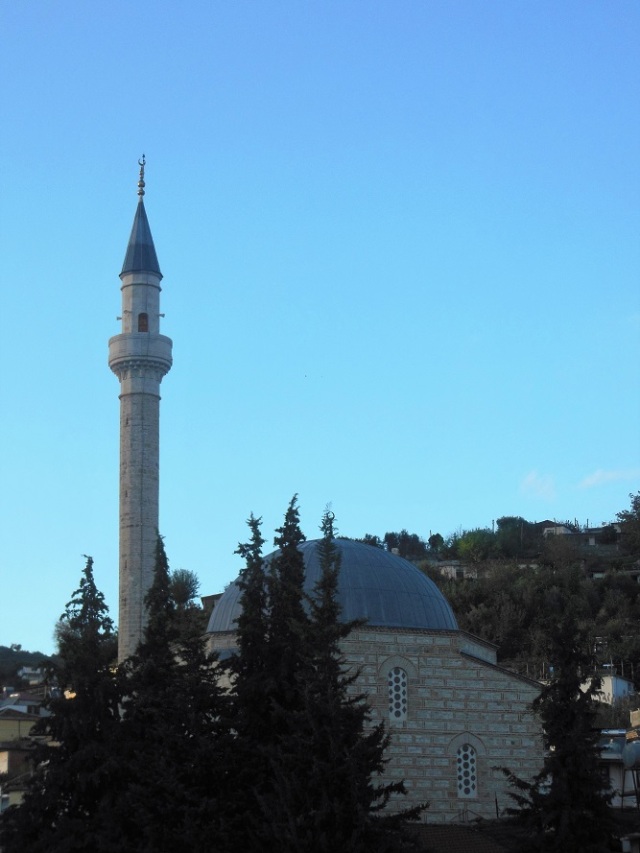 After the castle we hustled about from landmark to landmark.  This is the Leaden Mosque, c. 1555.

In many of the traditional houses of Berat, the upper floors jut out over each other and the windows seems to be saying “Hey look—what’s that over there?”

At dusk as the clouds over Berat turned to cotton candy and we met a local man, Agim whose name means “dawn”.  Agim told us emphatically how much Albanians love Americans and then recited a history of American presidents with an emphasis on his favorites: James Madison, Abraham Lincoln, Woodrow Wilson (who advocated for Albanian independence) and Bill Clinton (who interceded on the behalf of the Albanians in Kosovo during the breakup of the former Yugoslavia).  Agim then gave us some serious advice about a certain Republican candidate in the upcoming American election “He is a dangerous racist and he says terrible things about women.  You should not vote for him.  If I were American, I would vote Hillary Clinton”.  Thank you Agim—good advice from a resident of country that suffered under a dictator for 40 years.  We’ll be sure to take the early voting option as soon as we’re back in the states.

Reluctantly, we headed back to our hotel and found ourselves in a promenade.  People, you should know this about me: in addition to loving medieval art and snacking, I absolutely adore the Mediterranean evening stroll, known in Italy as the passeggiata.  In Albania, the stroll is called xhiro and it is delightful.  We joined the crowd slowly cruising down Boulevard Republika, teenage girls in high-waisted jeans locking arms, young men with man purses and sweat pants, old couples with boxy suits and tots with their parents all enjoying the warm autumn air.  We reached the end of the promenade and even though we needed to get to bed for an early morning bus, we said, “What the heck!” and strolled along with the xhiro back in the other direction.  When we reached the end of the promenade a second time all the lights cut out along the boulevard, leaving crowded cafes in the dark and all the strollers under the light of the stars.  Electrical outages must be a common occurrence in Berat, because the people did not react much, just continued walking and sipping coffee in the dark.  “What the heck!” we said again followed the xhiro a third time under starlight, while cell phone flashlights lit up around us and slowly the sound of generators buzzing filled the night and café lights popped on while we walked arm and arm back to our guest house.

How we got to Berat : bus from Durrës.

Where we slept: Guest House Villa Lili.  Price: €19.80 for a double. Recommended: highly

Leave a Reply to The Wife of Bath Cancel reply

← The view from Albania so far; Shkodër, Lake Koman and that one ubiqitous haircut
Post-communist rainbows fade to hipster in Tirana →