Here’s what happened to Tirana, Albania: communism screwed it over for 40 years, destroyed much of its historic architecture—mosques, Orthodox cathedrals and an Ottoman era baazar—and then replaced those once beautiful buildings with architectural train wrecks.

Architecture train wreck case in point: this so-called Pyramid of Tirana was originally the Enver Hoxha Museum.  (For those of you who are not fluent in 20th century Balkan dictators, Enver Hoxha ruled over Albania from the mid-40’s to the mid 80’s).  It just so happens that the architect of this pyramid/museum was also Enver Hoxha’s daughter.  I mean, what are the chances that the committee for choosing a designer for a dictator museum decided to go with a relative of the very same dictator?

These days, the Pyramid appears to be abandoned and its primary function is to serve as a slide for the most fearless Tiranian youth. 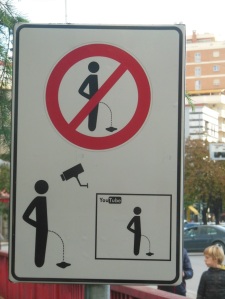 Tirana’s attempt to turn its scarcity of infrastructure into an asset is charming and weirdly hipster.  Why provide public bathrooms when you can put up hilarious warning signs about public urination instead?

Tirana’s urban planning scheme boils down to this “Ugly?  Cover it up with colorful paint!”

Exposed pipes?  Decorate them with pink and yellow triangles. 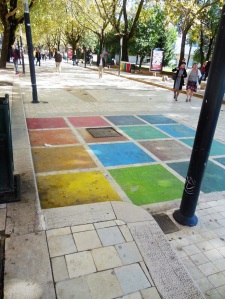 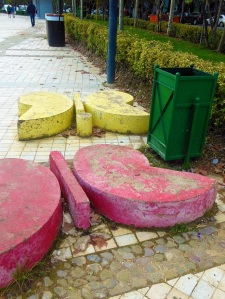 Paint a rainbow grid on the ground, or better yet, throw some bright, concrete butterflies on there for no good reason.

Oh wait, why not just put rainbows on everything? 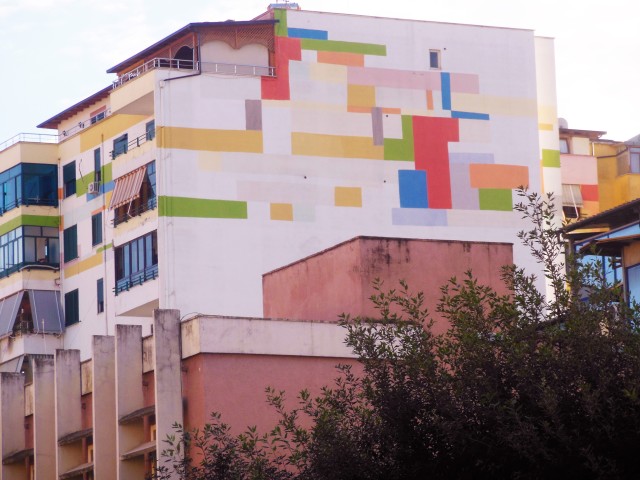 Put a horse and jockey on a mixed business-residential building, just because you can.

Much of Tirana’s primary color aesthetic is starting to fade in the hot Albania sun, leaving some buildings with a decidedly Miami Beach vibe.

Make mine an aqua balcony.

Stack it with stripes.

If you appreciate a tenacious city, a city with more hipness than infrastructure, then Tirana is the city for you.  Stay a while, walk through the neighborhoods and enjoy the rainbow. After all, Tirana survived 40 years of abuse, put on lipstick and colorful dress, and strutted back out into the world with attitude.  Give this town a high-five.

How we got to Tirana: flight from Chicago.

Where we slept: Center Rooms Oresti.  Price: €36 for a double.  Recommended: yes.

← Starlit xhiro in Berat, Albania
Lost in the Orientalist painting that is Gjirokastër, Albania →