I went to Nowa Huta to gawk at a dreary communist dystopia and found myself in a Renaissance ideal city.  Oh man, I just love when this happens, the travel surprise.  In fact, not including that time we traveled to Ghent and accidentally encountered a blackface Christmas celebration have I ever had my expectations so turned on their head.

Nowa Huta is now part of Krakow, though when it was constructed, from the 1950’s through the 1970’s, it was more like a suburb.  Designed by Tadeusz Ptaszycki as a self-sufficient town for steel mill factory workers , Nowa Huta is commonly described as “socialist realist”.  I imagine that, due to the political climate of the time, Tadeusz Ptaszycki had to say the town was socialist realist, but the dude was subversive as hell because Renaissance is written all over this place.

Nowa Huta means “new steel mill” so, as you might imagine, there’s a steel mill onsite.  (We didn’t get a photo so I’ve taken this one from Wikimedia Commons.  All other pictures are our own). 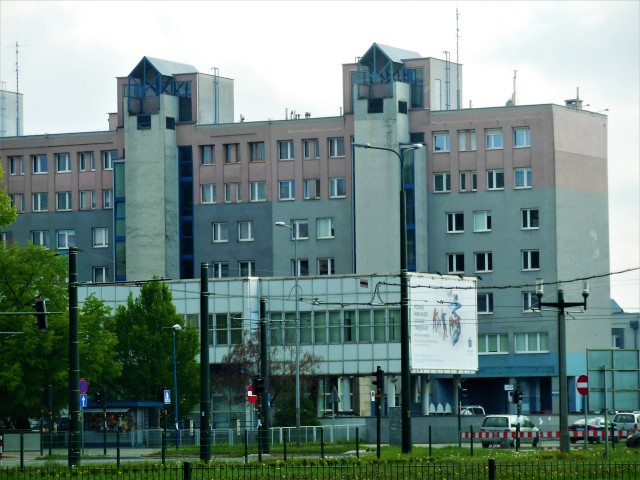 There’s also another factory just outside the neighborhood.  Here’s a picture I took from the tram. 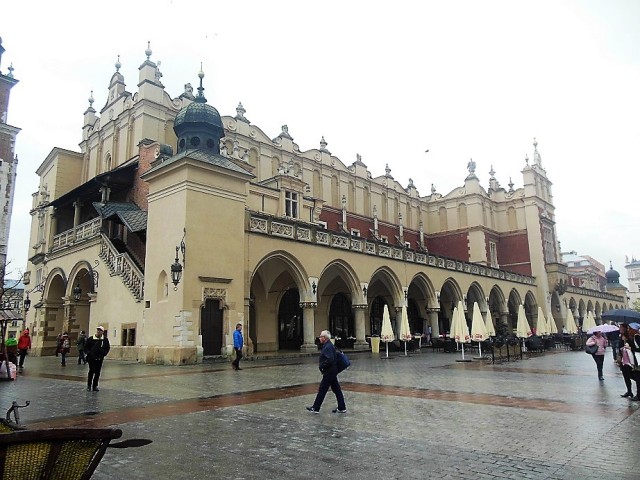 Compare the factories, especially the steelworks, to the design of the Renaissance era cloth hall in the old town market square of Krakow.  The designers incorporated a Renaissance scale and roof-line into the newer buildings.

Nowa Huta’s urban planning is also in the spirit of the Renaissance.  The tram dropped us off in Plac Centralny, an area of wide, grand streets radiating off a central square.  (You’ll see that the building in the distance in the photo above has Renaissance-ish arcades.)

Once off the main boulevards, the smaller streets branch off in an orderly and pleasing fashion.  There is a lot of green space and small grocery stores.  Kids are playing everywhere.  This is a densely populated area but it doesn’t feel crowded. 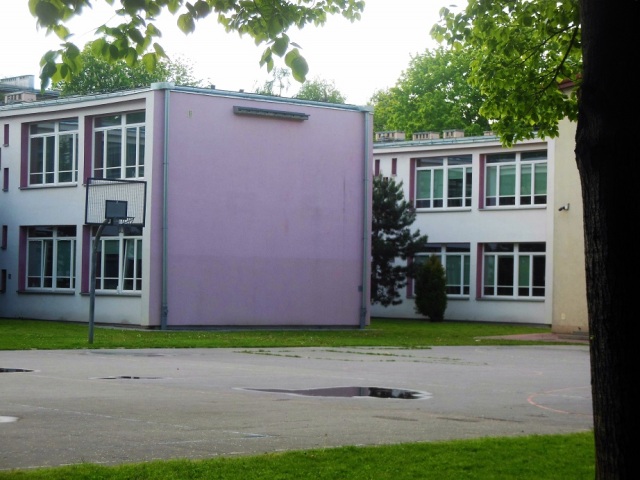 I like the clean lines and inset windows of this school.

Nowa Huta’s classically designed Teatr Ludowy opened in 1955.  I hope to return some day and see a performance here. 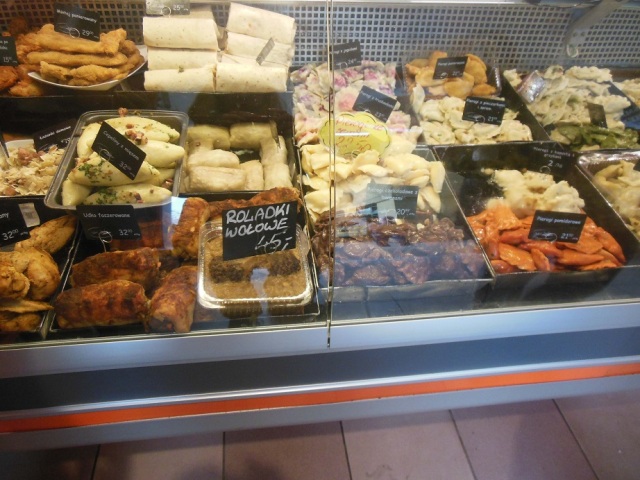 We stumbled on an outdoor market which—thank you baby Jesus—had a public bathroom.  There was a deli attached to the market where a nice lady heated up some cabbage rolls for us.

Built from the mid 60’s to the mid 70’s, Arka Pana church certainly does not evoke the Renaissance.  Arka Pana means “The Lord’s Ark” so you are meant to think it looks like Noah’s Ark.  Hmmmmm….maybe if Noah’s Ark was designed by Le Corbusier.

HOB and I were freaking out over the design of this building.  (When two architecture nerds get excited there’s a lot of pointing and hopping around involved). 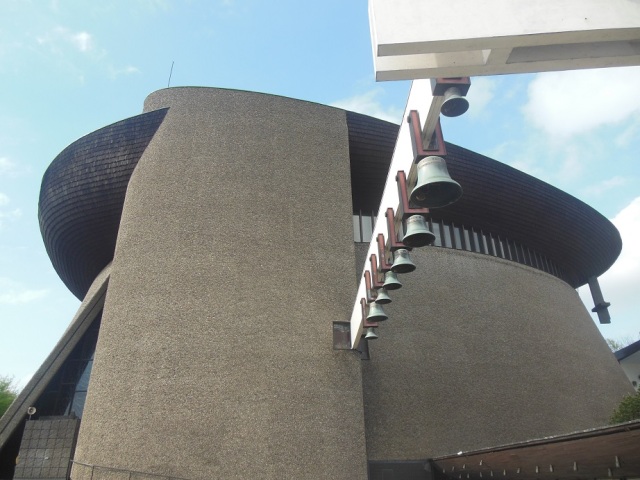 That white beam with the bells on it continues into the interior of the building.

When we entered a mass was in progress so we stayed until it ended.  There were still people hanging around afterwords for a communion service we only took a couple of discreet photos.  There was lovely stained glass as well as some (finally!) legit socialist realist murals of the happy peasant variety.

As we were leaving we stopped by a large apartment block known as the Swedish Block—another superb architectural surprise, this one a Modernist one.  The architect Marta Ingarden gets credit for this building, which, like the rest of Nowa Huta, is downright cuddly.  Seriously, can I live here?

HOB and I were in Nowa Huta for a half day, which wasn’t nearly enough time since we missed out on even more architectural gems.  This neighborhood is severely underrated, largely ignored by tourists, and worthy of UNESCO status.  Don’t miss it!

How we got to Nowa Huta: tram # 4 from Krakow’s main station.
Where we slept: Apartamenty Astur.  Price: €42 for a double. Recommended: yes.

← The entirely real glory of the Viet Stoss altarpiece in Krakow
Picnic at the Old Globe Theatre, San Diego →