In 2014 someone tried to steal my apartment building.

Her name was Tanya, a petite and nonthreatening-looking woman who had briefly owned a unit in the building that was foreclosed on in the 90’s.  One day she showed up in our lobby with a locksmith and he was already mid-way through changing our door and mailbox locks when one of our owners intercepted them.  That owner called another owner, and then another.  Soon there were several owners in the lobby, arguing with Tanya, the locksmith, and eventually with the police.  Our building has 19 apartments, each with individual owners, but Tanya insisted that she owned the building and that the rest of us were squatters.

We filed a police report against her for trespassing and you think that would be the end of things.  But Tanya kept returning.  She “served” us with falsified papers.  She called in city inspectors.  Then things got really weird: Tanya changed the contact information connected to each apartment’s pin number with the Chicago’s recorder of deeds to her name and address.  She filed a DBA (Doing Business As) for a business called Church of Law with one of our units as the stated business address.  Tanya stalked our building for months, “checking in” on social media and posting pictures of the entry doors under all caps declarations of TRESPASSERS.

At great expense, we brought Tanya to court.  She failed to show up for several hearings and when she finally did face justice, she told the judge that our building was left to her by a German circus.  The judge found her unfit to stand trial.  Eventually, Tanya quit trying to steal our building and after a year or two I stopped thinking about her.

Over the last few weeks, I’ve started thinking about Tanya again.  Well, not really about her, but that strange situation.  It seemed so impossible  that anyone could just claim “I own this” and change my locks and the address on my deed.  In a bit of remarkable timing, our quarantine in Chicago coincided with the start of construction of a townhouse development immediately adjacent to our building.  So while I am forced to stay home, concrete dust and unending loud sawing accompanies my solitary days, just feet from my windows, which I can’t safely open, no matter how desperate I am for fresh air.  And every day a concrete wall goes higher, cutting out my view of trees and sun, until now when I look out my window there’s just a small patch of sky left, which will soon enough be blocked by concrete too, taking my lovely afternoon light with it.  I’m having that same feeling again, like with Tanya—that some developer can just come along and take away my view, my light: my comfort.   It seems like I’m trapped in here and the walls are closing in. 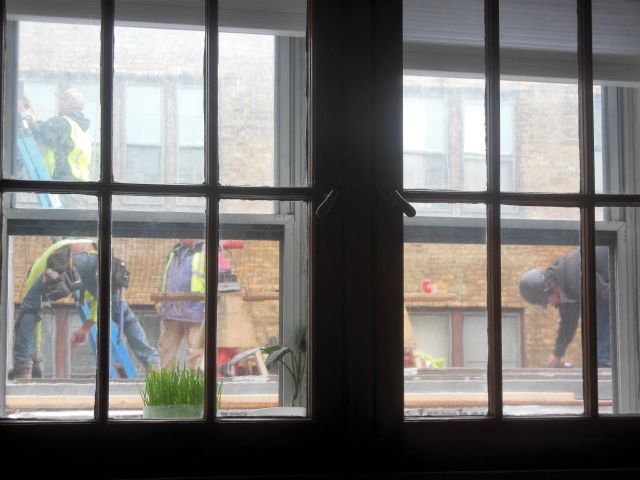 I don’t need any lectures on the changing density of cities.  This is something I’ve long been aware of,  even now, especially now when I’m trying to wrap my head around what home means.

My home for the last 19 years in Chicago, Rogers Park, is bounded by streets that follow the trails of the original Native American residents.  (I respectfully acknowledge the Pottawatomie, the traditional stewards of this land.)  The neighborhood grew more populated with the construction of commuter and elevated train lines.  Prior to the 1920’s the neighborhood was more like a suburb and residents lived in workmen’s cottages and bungalows and a scattering of fine mansions.

In the 1920’s all of Rogers Park (and the adjoining neighborhoods Edgewater and West Ridge) must have reverberated with the same racket I hear in my living room of the non-stop, frantic construction of apartment buildings.  Suddenly, apartment buildings were everywhere.  When I walk around (and yeah, since I’m in a quarantine without a car walking around is all I’m doing these days) it is easy to see the apartment buildings that went up in the 20’s since they are all variations of a theme:  Spanish Colonial, Tudor Revival, or something I call Euro Fanstasia, which is a missmash of European styles.  HOB and I live in a Tudor that was built in the height of the apartment building boom in 1928.

Home, before construction started next door

Since home sweet home = Tudor for me, I wanted to write about that style, which is endearingly  kitschy and totally out of context here in the Midwestern US.  In my mind, Tudor architecture should either manifest as cute cottages in English villages or be the stomping grounds of royals with big codpieces and small gene pools.

Of the Tudor style buildings there’s an even stranger sub genre of I’m particularly fond of: the Monster Tudor.  These are ginormous Tudor apartment blocks (occasionally with mixed use storefronts) containing so many units that the population of a few of them is likely more than that of my entire home town. 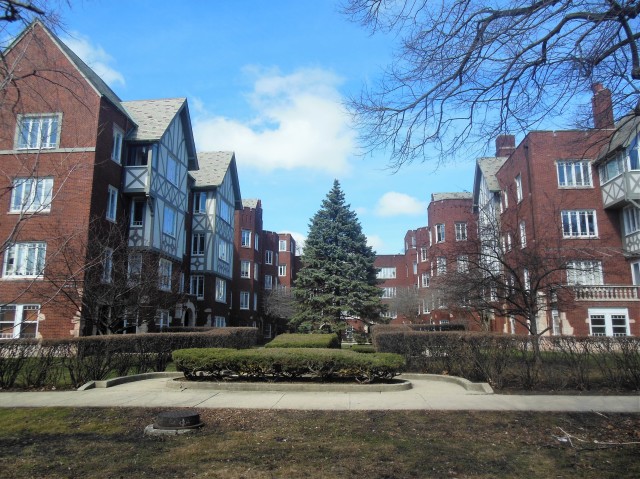 In my mind, Park Gables is the prototype for all north side Monster Tudors.  Running the length of a lovely park, these apartment have soothing views and—wait for it now—a swanky pool room.  (Fancy a dip in the ye olde Tudor poole?)

Architect James Denson designed this building in 1927 and pimped it out with all the class Tudor details.  Of course there are projecting gables with half-timber patterns and stucco wall cladding.

Castle Tower, on the far north side, is a prime example of the kitschy, out of context vibe these Tudor buildings have.  Look at those battlements!  Were men in bowler hats and ladies in flapper dresses pouring boiling oil on their enemies in between dancing the Charleston? 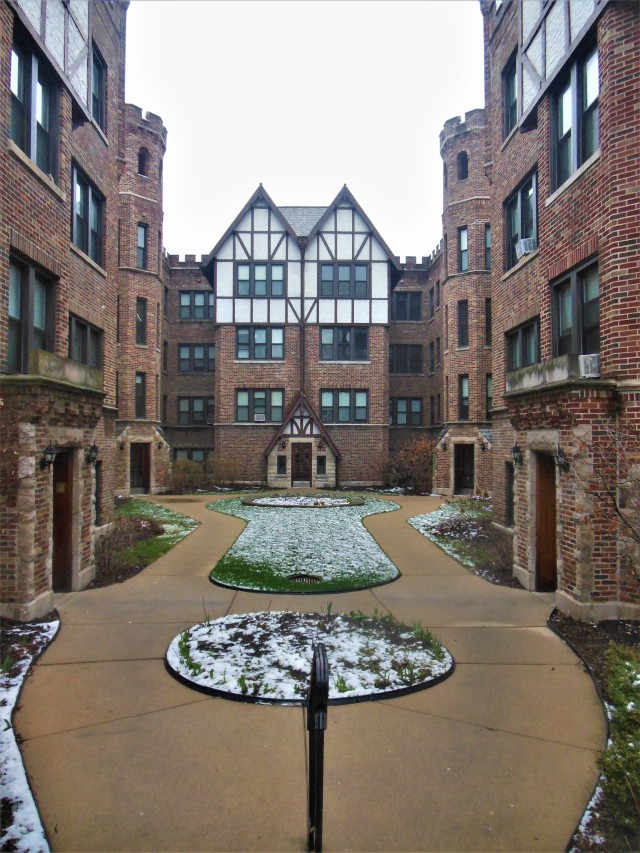 I adore the twin gables with their own inset baby gabled door.

Here’s a mixed use Monster Tudor in Edgewater that takes up an entire block. 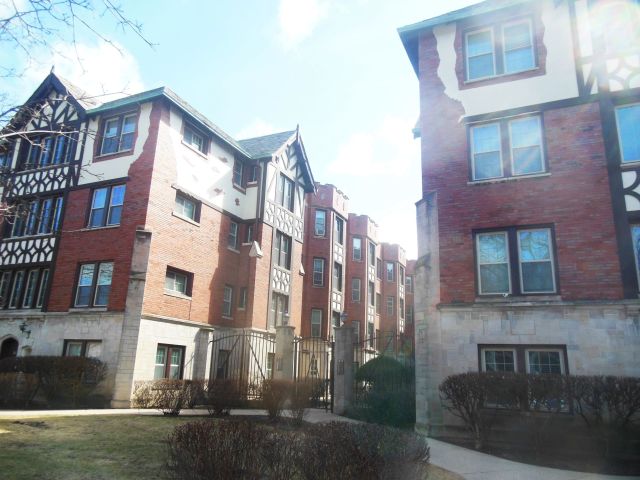 When HOB and I first moved into our Tudor building we were charmed by all the details and apparent care with which it was built.  We soon discovered other buildings nearby that were quite similar, like this Monster Tudor c. 1929 on Touhy Ave.  We talked about it a lot, coming to the conclusion that these buildings were the much treasured creations of European craftsmen, recent immigrants from Europe who were bursting at the seams of their folkloric costumes to recreate the architecture of their homelands.

Well, that was a dumb fantasy, akin to Tanya’s claim that our building was left to her in a German circus.  The truth about the Tudor building avalanche of the 1920’s is that they were funded by developers and designed at lightening speed by architects in order to maximize profit. Anthony H. Quitsow, the architect of this Monster Tudor on Touhy (as well as our apartment building), designed buildings all over the north side of Chicago and in south Evanston.  Admittedly, I’m a lousy researcher but I’ve not seen any evidence that Quitsow was fresh off the boat from a quaint village in England.

So here I am, quarantined and working at home in order to stay safe, while feet from my window construction teams performing the apparently “essential” work of luxury townhouse development risk the health of themselves and their families in order to make the developer a quick profit.  Knowing that this is not a new scenario, that in fact my own apartment was built under similar circumstances and with a fast profit motive, doesn’t make me feel any better after all, or any less trapped.  It just feels terrible, like developer has succeed in what Tanya failed at six years ago: stealing my home. 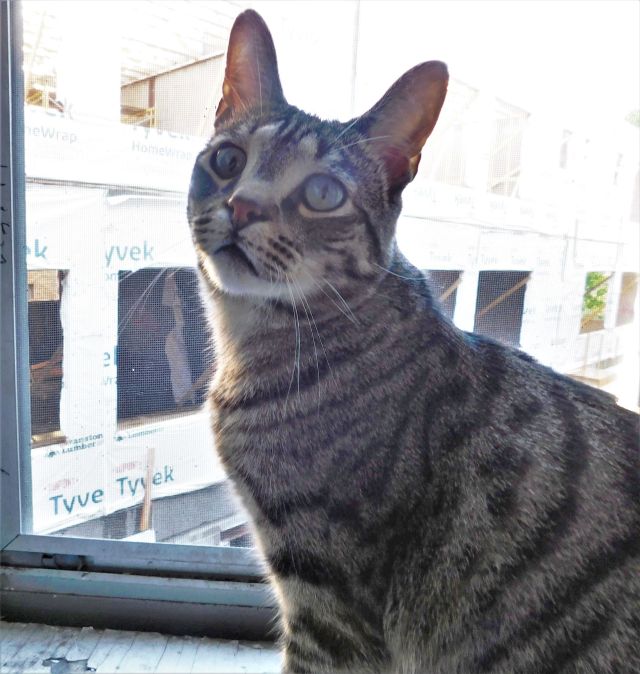 Shinto, at least, seems to enjoy watching the construction