When HOB and I got on a bus in Xi’an we were unclear about when we should get off.  “Just look for a big pagoda” I said—this seemed logical since we were on our way to see something called the Big Goose Pagoda. 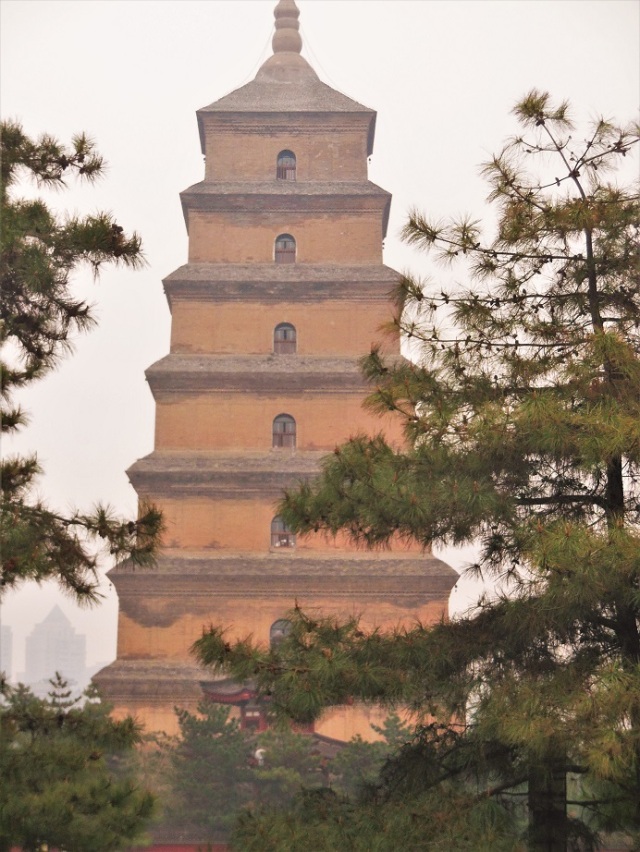 And that turned out to be a good idea—-we saw this out our window and jumped off the bus.

The Big Goose Pagoda really is striking.  It was built in 652 during the Tang Dynasty which I guess was a time when they made pagodas square instead of round.

Not going to lie, though—HOB and I didn’t pay much attention to the Pagoda. We had intended to but when we started walking towards it we entered a plaza filled with seniors dancing underneath blossoming trees.

Middle-aged and elderly folks, elegantly dressed and coiffed, twirled in time to piped in music.  Women and men danced together, women danced in couples, and some people unselfconsciously danced alone.

Many of the dancers were quite skilled.  If you watch the clip above you can see the dancers smartly flip their hands up when they extend out into a twirl.

Just to the side of the dancers lots of other people were exercising.  There is a game we saw a lot of people playing that’s similar to hackey sack (but without the hippies) which involves several people keeping a stuffed birdie in the air.  The Chinese hackey sack players were often elderly, but also shockingly flexible—nimbly kicking the birdie behind their back like teenagers.

This woman—let’s call her HOB’s girlfriend—was quite the athletic exhibitionist.  Her warm-up routine involved much bending over and wiggling while sliding a cord under her feet.  (The bending over was of particular interest to HOB who suddenly developed an appreciation for the benefits of stretching).

In every city we visited in China we saw older folks working out and dancing in public.  Sometimes it would be just one lady grooving to a boom box in the park or it could be a dozen seniors line dancing.  I kept thinking “Damn these people are hot!”

I don’t want to live in China, but the country’s approach to aging made me jealous.  It was so refreshing to be in a place where age doesn’t make people invisible, especially women.  It seems like American women in their later years have just a few models to choose from; they can be either Grandma, Earth Mother, Cougar, or whatever it is you call a lady with blown out hair who wears pashminas and constantly drinks diet coke.

In addition to being limber, China’s older citizens are well dressed, a compliment that cannot be extended to many of the younger set.  This young man, who was watching the dancing action in front of the Pagoda, was wearing a jacket that read “Design Clothes For Jesus – Fucked”.

After tearing ourselves away from the delightful dancing at Wild Goose Pagoda, we found a street vendor and I bought a roasted sweet potato snack.  You know what?  I’m never going to be these things; a Cougar, a Granny, an Earth Goddess or a Diet-Coke-and-Pashmina-Lady.  But Woman-Who-Eats-Street-Food?  That I can represent.

How we got to Xi’an: train from Pingyao.
Where we slept: Xing Long No.37 Hostel. Price: €16 for a double. Recommended: yes.